What Does ‘Merkaba’ (Merkabah) Mean?

The word Merkaba can be broken down thus: MER: rotating fields of light, KA: spirit, and BA: soul (this is taken from an 18th dynasty Egyptian translation, and in Hebrew it means ‘Chariot’). Therefore, Mer-Ka-Ba means the spirit or energy body surrounded by counter-rotating fields of light, or spirals of energy (as with a strand of DNA), which transport spirit or consciousness from one dimension to another.

It became an object of visionary contemplation for Jewish mystics in Palestine in the 1st century AD; in the 7th–11th century, Merkabah mysticism was centered in Babylonia. Merkabah mystics courted ecstatic visions that involved a dangerous ascent through celestial hierarchies to the throne of God. Hostile angels guarded the gates to the seven “heavenly dwellings,” and a successful journey required magical formulas. The Talmud warns that of four men who engaged in Merkabah, only one had a true vision; of the others, one died, one went mad, and one became an apostate.
Merkabah (Hebrew) A chariot, vehicle; used in two senses: first, as a chariot, the Qabbalists saying that the Supreme forms and then uses the ten Sephiroth as a chariot for descending through the various worlds enumerated in the Qabbalah. These worlds are the ten Sephiroth themselves, and ‘Adam Qadmon (the Heavenly Man) is the same as the ten Sephiroth considered as a hierarchic entity permeated by and inspirited by the divine hierarch or Supreme. Here it is generally equivalent to the Sanskrit vahana. Second, it is secret wisdom or knowledge: “without the final initiation into the Mercaba the study of the Kabala will be ever incomplete, and the Mercaba can be taught only in ‘darkness, in a deserted place, and after many and terrific trials.’ Since the death of Simeon Ben-Iochai this hidden doctrine has remained an inviolate secret for the outside world. Delivered only as a mystery, it was communicated to the candidate orally, “face to face and mouth to ear'” (IU 2:349). The secret wisdom or knowledge is envisaged as a vehicle or chariot because what men call esoteric wisdom is the vehicle for the communication to human consciousness of the mysteries of the universe, and consequently of man. 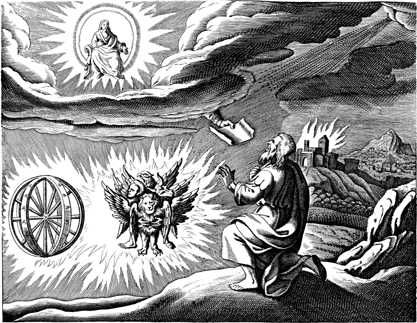 THRONE OR CHARIOT OF GOD
AS DESCRIBED BY EZEKIEL

It is not just the content of these ideas which is considered esoteric; their authors too hid their own individuality and their names, concealing themselves behind biblical characters. This self-concealment was completely successful. This pseudepigraphical pattern continued within the mystical tradition in the centuries that followed. The mysteries of the Throne did not aspire to an understanding of the true nature of God, but to a perception of the phenomenon of the Throne on its Chariot as described by Ezekiel, traditionally entitled Ma’aseh Merkabah. 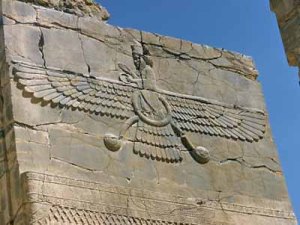 In The Secret Doctrine, Fohat is spoken of as the vahana of the “Primordial Seven”; physical forces as the vehicles of the elements; and the sun as the vahana or buddhi of Aditi (I 108, 470. 527n). Again, all gods and goddesses are “represented as using vahanas to manifest themselves, which vehicles are ever symbolical. So, for instance, Vishnu has during Pralayas, Ananta ‘the infinite’ (Space), symbolized by the serpent Sesha, and during the Manvantaras — Garuda the gigantic half-eagle, half-man, the symbol of the great cycle; Brahma appears as Brahma, descending into the plains of manifestation on Kalahansa, the ‘swan in time or finite eternity’; Siva . . . appears as the bull Nandi; Osiris as the sacred bull Apis; Indra travels on an elephant; Karttikeya, on a peacock; Kamadeva on Makara, at other times a parrot; Agni, the universal (and also solar) Fire-god, who is, as all of them are, ‘a consuming Fire,’ manifests itself as a ram and a lamb, Aja, ‘the unborn’; Varuna, as a fish; etc., etc., while the vehicle of Man is his body” (TG 357-8).

Tracing my Latvian roots back as far as I can, telling stories along the way

on Shambhala, Buddhism, and Shambhala Buddhism